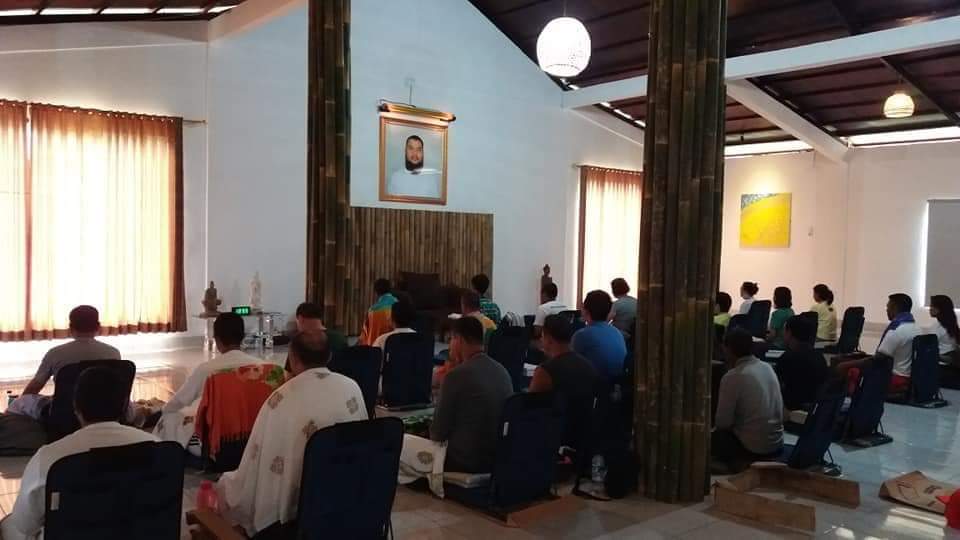 In the suranggama sutra, it is said that the Bodhisattva Guanyin practices the method of hearing inner sounds attaining enlightenment.

“Blessed Lord! I recall that ages ago, as numerous as the sands of the river Ganges, that there was present in the world a Buddha, called Avalokiteshvara by whose instruction I was encouraged to begin seeking enlightenment. I was taught to begin practicing by concentrating my mind on the true nature of Transcendental Hearing, and by that practice I attained Samadhi. As soon as I had advanced to the stage of Entering the Stream, I determined to discard all thoughts discriminating as to where I was or had been.

Later I discarded the conception of advancing altogether, and the thought of either activity or quietness in this connection did not again arise in my mind. Continuing my practice, I gradually advanced until all discrimination the hearing nature of my self-hood and of the Intrinsic Transcendental Hearing was discarded.

As there ceased to be any grasping in my mind for the attainment of Intrinsic Hearing, the conception of enlightenment and enlightened nature were all absent from my mind. When this state of perfect Emptiness of Mind was attained, all arbitrary conceptions of attaining to Emptiness of Mind and of enlightened nature were discarded. As soon as all arbitrary conceptions of rising and disappearing of thoughts were completely discarded, the state of Nirvana was clearly realized.

Then all of a sudden, my mind became transcendental to both the celestial and terrestrial world, and there was nothing in all the ten quarters but empty space, and in that state, I acquired two wonderful transcendencies.

The second transcendency was that my mind was in perfect conformity with the minds of all sentient beings of the Six Realms and felt with them the same earnestness and longing for deliverance.

Blessed Lord! because of my adoration for that Buddha, Avalokiteshvara, he taught me how to attain the Diamond Samadhi by the single method of concentrating my mind upon Transcendental Hearing. And, moreover, he helped me to attain the same compassionate capacity that all the Tathagatas had, by reason of which I attained the thirty-two kinds of transformations that are instantaneously available in response to the prayer for deliverance from any part of the world at any time. These transformations have all been attained and exercised with perfect freedom and spontaneity in the mysterious Diamond Samadhi which I attained by concentrating my mind in the practice of Dhyana on the nature of Transcendental Hearing.

Blessed Lord! I have also, because of the mysterious powers that accompany the Diamond Samadhi, and because of my being in perfect conformity and with the same earnestness and longing for deliverance with all sentient beings, in the Six Realms of all the ten quarters of all the universes, past, present, and future, be able to bestow upon all sentient beings the same Fourteen kinds of Fearlessness, which animate my own mind as my attainment to the original nature of perfect accommodations is wonderfully developed from the hearing organ to include all the sense-organs and discriminating mind, my body and mind profoundly and mysteriously embrace all the phenomenal world so that if any disciple should recite my name, his blessing and merit would be like and equal to that of any Prince of the Lord’s Dharma, whether he uses the same name or some other name.

Blessed Lord! The reason why their merit is like and equal for one to recite my name, and for another to recite some other name, is because of my practice of Dhyana by which I acquired the True and Perfect accommodation.

Blessed Lord! This is what is meant by the Fourteen kinds of Fearlessness of Powers of Deliverance which bring blessing to all sentient beings. But in addition to the acquirement of perfect accommodation by means of my attainment of the Supreme Enlightenment, I have also acquired another Four kinds of inconceivable, wonderful Transcendencies of Spontaneity.

The First is as it is because when I first attained to my Transcendental Hearing, my mind became abstracted into its essential nature, and all the natural powers of hearing, seeing, smelling, tasting, touching and understanding attained to a state of pure, glorious, enlightenment of perfect mutuality and accommodation in one perfect unity of Awareness. Because of this, I have acquired this great Transcendental Freedom, so that when I give deliverance to sentient beings, I can transform myself into wonderful appearances . . .Sometimes I appear in a form of kindness, or in a form of justice, or in a state of concentration, or in a state of intelligence. But in all, I do it for the sake of deliverance and protecting sentient beings so that they might acquire alike Great Freedom.

The Second inconceivable, wonderful Transcendency of Spontaneity is as it is because of my emancipation of hearing and thinking from the contaminations of the six sense-objects. It is as if the sound were passing through walls without any hindrance. Thus I can skillfully transform into different kinds of appearances and recite different Dharanis and can transform these appearances and recitation of Dharanis, to give the Transcendental Power of Fearlessness to sentient beings. Thus in all the countries of the ten quarters, I am known as the Giver of Transcendental Power of Fearlessness.

The Third inconceivable, wonderful Transcendency of Spontaneity is as it is, because of my practice upon the pure, original Essence of perfect accommodation, so that wherever I go, I lead sentient beings to a willingness to sacrifice their lives and valuable possessions in order to pray for my compassion and mercy.

The Fourth inconceivable, wonderful Transcendency of Spontaneity is as it is, because of my acquirement of the Buddha’s Intrinsic Mind and because of my attainment of the supremacy so that I can give all different kinds of offerings to all of the Tathagatas of all the ten quarters of the universes.

As my Lord has enquired of us as to what was our first perfect accommodation, of the eighteen spheres of mentation in contact with objects through the sense-organs, I answer that my first perfect accommodation was when I attained to the state of perfectly accommodating reflection of Samadhi by means of my Intrinsic Hearing and Transcendental Mental Freedom from objective contaminations so that my mind became abstracted and absorbed into the Divine Stream, and thus acquired the Diamond Samadhi and attained Enlightenment.

Blessed Lord! In those far off days, my Lord, the Buddha Avalokiteshvara, praised me for my skillful acquirement of the all accommodating Door of Dharma, and in one of his great Assemblies, he announced that I, too, should be called Avalokiteshvara, “The hearer and answerer of prayer,” the Bodhisattva of Tenderest Compassion. As such, my Transcendental Hearing reaches to the ten quarters of all the universes, and the name of Avalokiteshvara prevails over all the extremes of human suffering and danger”

In the Vedas, yoga Upanishad says “Let yogi sit on Sidh Asan and while practicing the Vaishnavi Mudra, should hear the sound through his right ear. By communion with the Word, he will become deaf to the external sounds and
will attain the Turya Pad or a state of equipoise within a fortnight.
First, the murmuring sounds resembling those of the waves of the ocean, the fall of rain, and the running rivulets and the Bheri will be heard intermingled with the sounds of bell and conch, etc.”

Into eight stages yoga in Jainism, as follows:

1. Mitra — Vision is very dim. It can be compared to the light of grass particles which is momentary and extremely dim. The yogi in this stage adopts vows of non-violence, truth, celibacy, etc. To him all living beings are friends. He bears ill will to none. He finds great happiness in good thoughts and good deeds, but it is not possible in this stage to go much higher.

2. Tara — Vision here is also dim, compared to the light of cowdung cake, although vision is a little better, but it is momentary and dim. One adopts short-term rules for purification. He becomes purer in his relations with the outside world also. He busies himself in reading of books of great seers. He feels a great interest in all that is helpful in raising the soul higher.

3. Bala — Vision here is also dim, compared to wood light. Asanas are performed. He can easily do Padmasan etc., but it is not external Asanas which are aimed at but the spiritual Asanas. He becomes firm in external Asanas, but he experiences glimpses of spiritual happiness. He rises a little above the body.

4. Dipra— is compared to the light of Deepak or candlelight. Here he attains Pranayam not only externally but internally also. He has now firm faith that it is the soul which is to be called for primarily. To save the soul he may even give up his body. To attain purification of the soul, he is prepared to face any dangers and difficulties. His leaning is more and more toward soul. He attains peace not known before.

5. Sthira — is considerably bright and lasting, compared to the light of jewel. He sees the world and worldly things in
proper perspective. Strong likes and dislikes have disappeared. He becomes composed and calm and realizes and
feels that he is not the body but he is some Divine element residing within. He is the soul and he feels the difference. He feels his body different from the soul. He gets the Sound from within of various wonderful tunes which attunes one with Samadhi. Desires of body and senses are not liked by him. He has full faith in God, in the pure form of the soul, and he is yearn￾ing to be pure, absolutely pure.

6. Kanta — can be compared to the light of star. Here there is great control over mind. The mind finds happiness in devotion to God, in love, and the meditation of pure soul. The mind becomes steady in these higher things and finds no pleasure in physical happiness and amenities. Here he becomes so pure that he can get a vision of Siddhas — liberated souls, great souls. His actions also become so pure that he is loved even by great Saints.

7. Prabha — can be compared to the light of sun. It is bright and strong. Here right knowledge has grown immensely and meditation becomes his second nature, and he finds innermost happiness. He is serene, he has great control over his senses and mind.

8. Para — can be compared to the light of moon, serene, peaceful, and cool. Here meditation reaches the highest pitch and he becomes immersed in it. He attains Samadhi (Sama) and becomes faultless. His state can be compared to full Moon in all its Splendor.