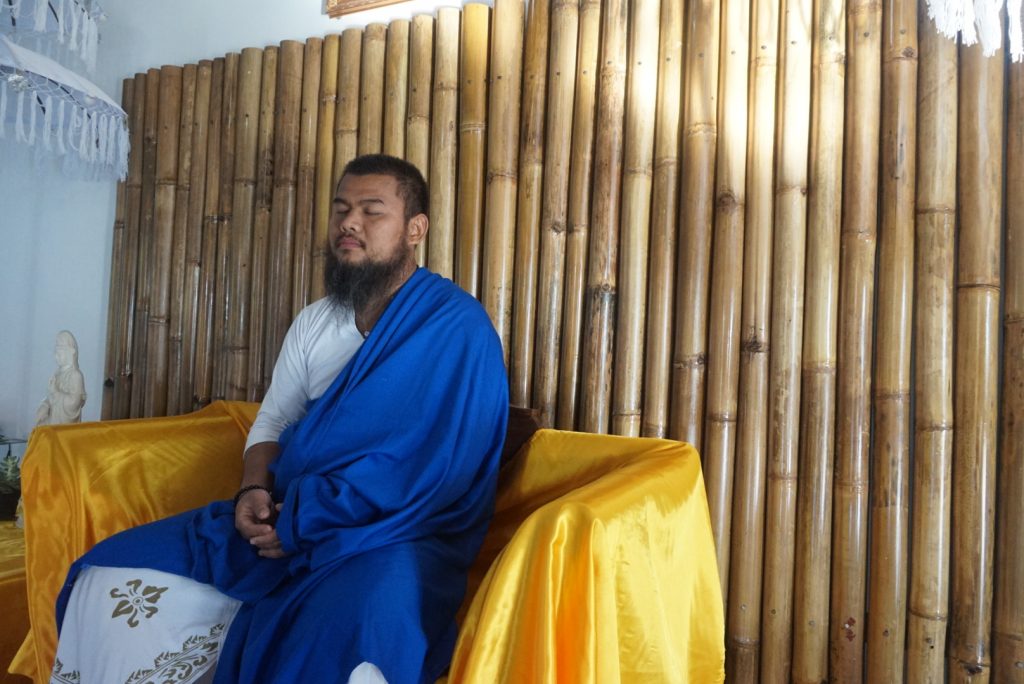 Guru Adi dharma was born in Sumatra in 1981, one of the provinces in Indonesia. He comes from a poor family and an untalkative and shy child. When he was 13 years old, he began to know Buddhism. He became interested in meditation practice taught by Sakyamuni Buddha. Every day he sat for a few minutes to one hour to do meditation and every time he meditated, he immediately entered the realm of peaceful light.

Apart from regular meditation, Guru Adi Dharma also worked as an educator on Buddhist teachings at a school. Once, Guru Adi Dharma was teaching at school, students at the school were required to pray and close their eyes before studying. After opening their eyes, they reported seeing a bright light and some saw Guru Adi Dharma’s astral body sitting on a lotus. This often happened when the teacher taught at school.

One-time Guru Adi Dharma thought he didn’t want to be reborn in the future. He didn’t want to teach humans in this birth, but in meditation, Supreme Master Chinghai’s astral body came back in a clear vision and said, “You must not end your vows, otherwise who will teach humans?”

After some time of pondering, and remembering Supreme Master Chinghai’s inner messages, he finally followed his destiny to teach humanity. He also started teaching and giving initiations to several people in 2008, when Guru Adi Dharma was 27 years old. He began to teaching people with a message of wisdom and compassion. He then founded a spiritual group called the Yogisvara Meditation Group. He initiated hundreds of people and continues till date.

Master Adi Dharma teaches a way so that people can connect with the great power that resides in the body (within). He names this power as the Essence of God or Buddhahood. This power vibrates in the whole universe and can be heard by humans whose spiritual ear opened in the form an inner sound.

Master Adi Dharma thanks Supreme Master Chinghai for the teachings and initiation of the Guanyin method, and reminding Master Adi Dharma’s mission to come to the world …