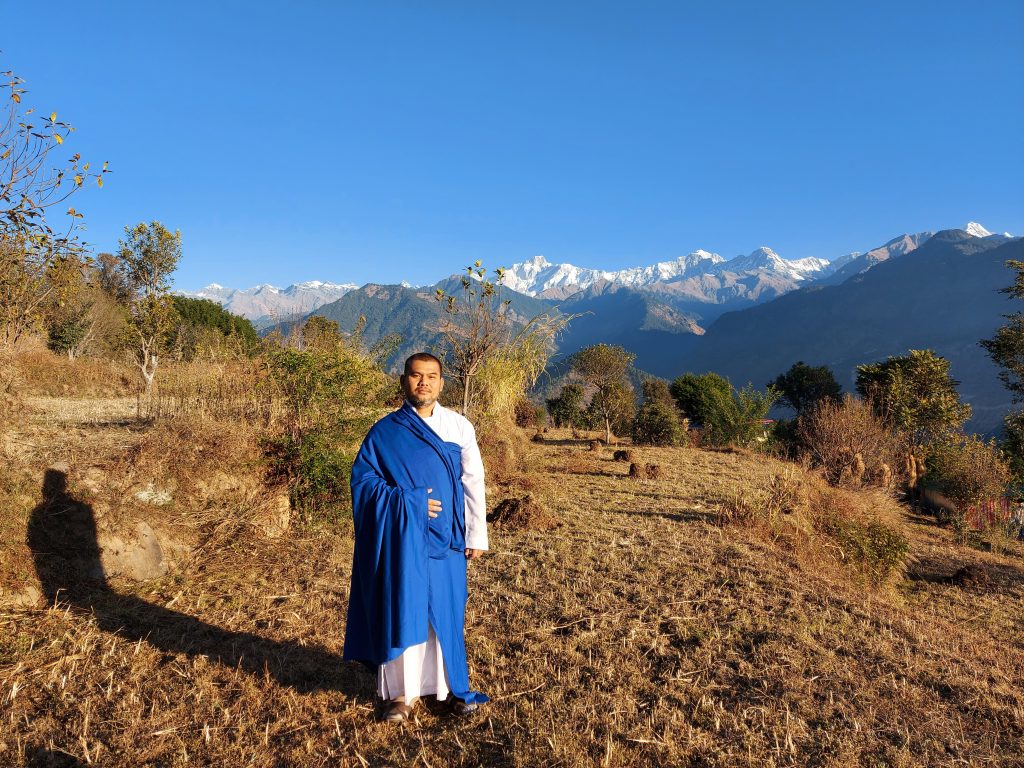 “A Call to the Himalayas”

From the scenic Himalayan mountain range, the clear Ganges river flows down and when the sun starts to peek, several ice-cap mountains emit the golden rays of the majestic sun.

There may be many Gurus who teach us in the world but only a few attain actual genuineness and enlightenment and are the chosen ones. Thus, even if they hid away,

The Gods would come to them demanding these great Gurus to teach and help more people and bless the world with their positive aura.

This occurred to Master Adi Dharma wherein The Great Lord Shiva appeared three times in the Guru’s meditation and demanded Guru to go to the Himalayas right away as one of his missions.

In the Himalayas, Guru will meet the long-awaited Mahayogi and immense spiritual power is also waiting for the Guru there.

After going through many small obstacles which are despised by the negative forces/Maya due to positive aura, which also tried to block His departure by all means helplessly, He got through because it was the time indeed so Maya/dark forces failed to stop Him.

He met many yogis on the way. They walked to the top of the Himalayas to perform hermitage. Some of them meditate in groups in Himalayan caves.

The cold temperature pierces the bone because it is below 0 degrees Celsius. Snowflakes are visible along the Himalayan path. If it weren’t for truth seekers, it would be very difficult to live there.

Himalayan yogis mostly shun contact with the outside world and ordinary people to maintain their purity. They choose to grow crops or consume leaves in the Himalayan forests.

Afterward, Guru sought out a quiet place to sit in meditation before a towering iceberg.

Shortly after, an old man with white hair and beard approached Him. He had no clothes on but only a white cloth covered below the waist with a serene and radiant face.

He is Maharama (The Great Rama) a Himalayan mahayogi who is thousands of years old and even more.

Maharama said to Guru, “I have been waiting for you for a long time. You are my final mission. Take this mega-immense Power and a cosmic weapon to be wielded wisely for the peace of all beings and the good of the world.”

Guru accepted it with deep reverence.

Suddenly there was a huge outburst of extremely bright light. The light merges with the Guru’s light so that there is a unification of the two immense energies.

Shortly afterward Maharama greeted Guru goodbye and smiled that his last mission had been completed.

His physical body turned into a very bright golden light and rose up into the sky.

The avatars, Buddhas or true Gurus of the past have come and meditated here. Even though they have gone hundreds or even thousands of years ago, some of their energy can still be felt and concentrated in the Himalayas.

In meditation, Guru received a message that Babaji Nagaraj would meet him a few days later. Babaji is an immortal human. He can live in two realms namely, the physical and spiritual realms. He is free to transform or embody anything for certain purposes. Whenever needed, He can appear suddenly.

After Guru had done enough meditation, He began to climb down to the foothills of the Himalayas where the river Ganges flows very clearly.

Many people perform rituals to worship Goddess Ganga and cleanse the body. Many yogis live here, some build small huts to live in and some live in the provided ashrams. Guru stayed for a few days and days later He walked on the banks of the beautiful Ganges.

A yogi in orange robes with a serene face and piercing eyes came to meet the Guru and He already recognized the yogi’s aura.

Yes, He is Babaji Nagaraj!

Babaji approached Guru with a smile and handed him a very ancient scroll saying, “Only you are worthy to receive and understand the contents of this secret teaching. We, true Gurus, are like hidden diamonds. Those who find them will be lucky. We are not magicians who are showing off magic tricks in order to have a large audience. Keep going and don’t mind those who insult and belittle you. Your time has come to appear in the world soon! Many people have dreamed of you and seen you in meditation even though they have not met your physique. They will try to find you like looking for a valuable diamond.”

Soon Babaji disappeared like Himalayan mist in the wind.

After receiving the boon of spiritual blessings from Babaji, Guru looked for a quiet place away from the crowds and meditated for a while before the clear flow of the Ganges River. Small fishes were jumping in front of the Guru. You can see a rather large fish measuring 1-2 meters with a whitish silver color swimming towards Him.

Suddenly a woman appeared in a blue and white dress with lots of crystal decorations.

She said that She was Goddess Ganga.

She was very happy that Guru stopped by Her little river. Goddess Ganga requested Guru to touch the Ganges water so that this water would be purified again and those who use this water would find peace.

Guru agrees and touches the Ganges water splashing it. Goddess Ganga took a splash of water from Guru’s hand and washed her head.

Such is the experience of Guru’s journey to the majestic Himalayas for a “Call.” Although there are still many experiences Guru doesn’t narrate.

It is a highly valuable experience for Master Adi Dharma that some people desperately seek enlightenment. They renounce the worldly life, living single and abstaining by wearing a robe. Food shortages, extreme weather, and wild animal disturbances did not dampen their sincere intentions.

Their bodies look thin and their eyes are dim, but their hearts remain strong and patient. Even though it’s difficult, they still go through it, waiting patiently all their lives for a sun of enlightenment.

Their sincere intentions have stirred the heavens so true that Guru’s descend to the world. These true Guru’s descend from the heights of the spiritual realms for the few who yearn for liberation and enlightenment.